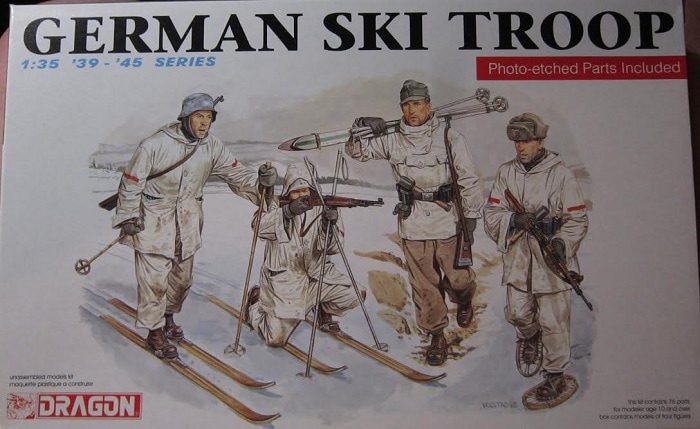 The box art shows 4 German ski troops out on the snow.

Three are all dressed in white hooded togas and pants. The pants are bloused into the tops of their low shoes. One has the white toga, but field grey pants.

The first trooper on the right wears snow shoes on his feet and a fur hat. He is armed with a 98K carbine. He has an ammo pouch, canteen, canvas bread bag and a leather pouch on his belt and a potato masher type grenade under the belt.

The second trooper is also armed with a 98K slung over his left shoulder. He too has a potato masher type grenade tucked into his belt and an ammo case, bread bag and canteen hung on it. He has a pair of skis and ski poles being held by his right arm above his right shoulder. He wears a soft peaked filed cap. He has field grey pants on.

The third trooper is kneeling on one knee on his skis and using his ski poles for a bipod while firing his 98K carbine. His hood is up and he appears to have a steel helmet under it on his head.

The fourth and final trooper is shuffling along on his skis with his poles. He wears a steel helmet and is armed with a 98K carbine slung on his back.

One corner of the box art says that the kit is intended for modelers over the age of 10 and that there are 76 parts in the kit.

Another corner of the box art says that there are PE parts in the kit.

One side panel of the box has the color box arts of 2 other kits that DML manufactures: kit no. 6043, a German STuG IV/late and kit no. 6045, German Gebergsjager troops (Cacasus 1942).

​The other side panel says that the kit contains four figures and that glue and paint are not included.

This is followed by the copyright of 1995 for this kit, over DML's street address in Hong Kong, China and that the kit was made there.

There is a color 2-view illustration of each of the figures.

Below them is black and white line drawings of: ski poles, ski boots, snow shoes and skis.

All illustrations are by DML's resident artist Ronald Volstad. 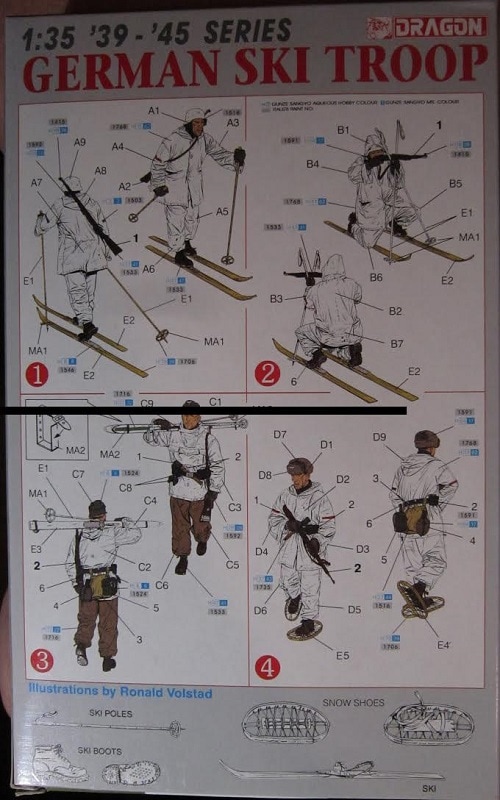 This kit contains 3 light-grey trees. 2 of the smaller trees are co-joined. There is a small steel PE fret. These are in 3 sealed cello bags. 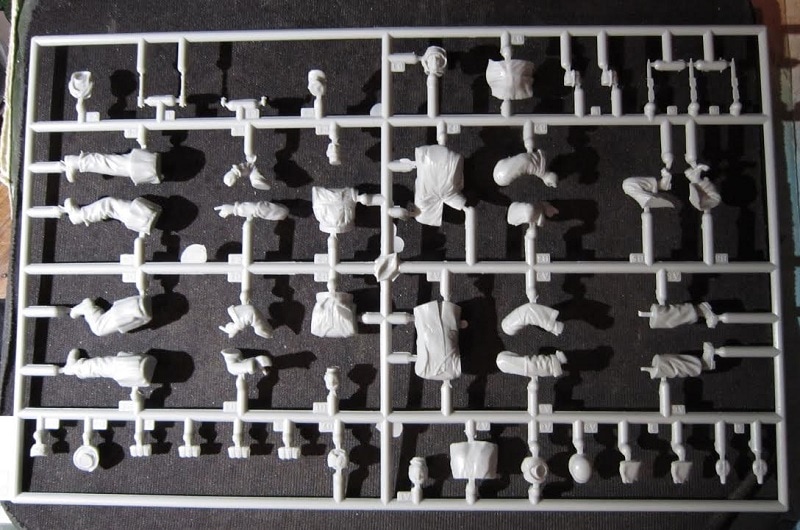 ​The 2 small light-grey trees are co-joined. One has ski poles on it. Six of them.

The other small light-grey tree holds 4 98K carbines, a pair of snow shoes and 3 sets of skis (12 parts)

​The steel PE fret completes the kits contents. It holds the circular sections of the ski poles and 2 straps that hold a pair of skis and poles in a bundle (8 parts) 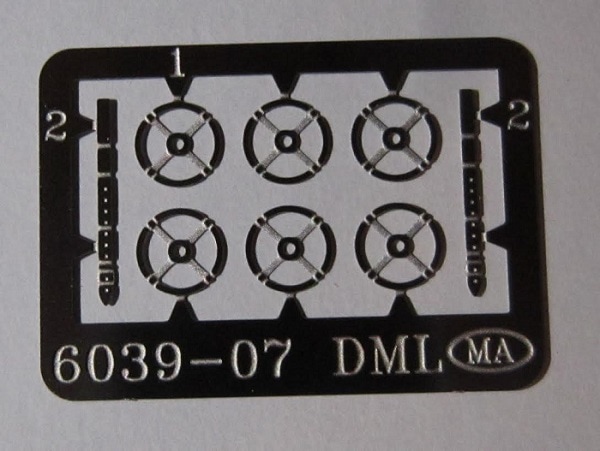 ​This is a neat kit of unusual soldiers. It will make a neat diorama. Parts are very detailed.

Highly recommended.
​I purchased my kit in the 90's at my local hobby shop.