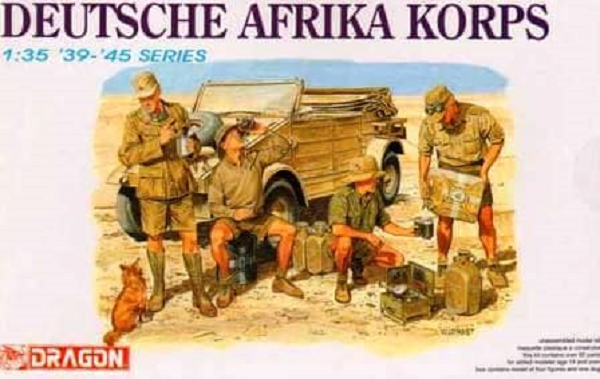 The Afrika Korps or German Africa Corps (German: Deutsches Afrika korps, DAK was the German expeditionary force in Africa during the North African Campaign of World War II. First sent as a holding force to shore up the Italian defense of their African colonies, the formation fought on in Africa, under various appellations, from March 1941 until its surrender in May 1943.

The Afrika Korps formed on 11 January 1941 and one of Hitler's favourite generals, Erwin Rommel, was designated as commander on 11 February. Originally Hans von Funck was to have commanded it, but Hitler loathed von Funck, as he had been a personal staff officer of Werner von Fritsch until von Fritsch was dismissed in 1938.

The German Armed Forces High Command (Oberkommando der Wehrmacht, OKW) had decided to send a "blocking force" to Libya to support the Italian army. The Italian army group had been routed by the British Commonwealth Western Desert Force in Operation Compass (9 December 1940 – 9 February 1941).

The German blocking force, commanded by Rommel, at first consisted of a force based only on Panzer Regiment 5, which was put together from the second regiment of the 3rd Panzer Division. These elements were organized into the 5th Light Division when they arrived in Africa from 10 February – 12 March 1941.

In late April and into May, the 5th Light Division was joined by elements of 15th Panzer Division, transferred from Italy. At this time, the Afrika Korps consisted of the two divisions, and was subordinated to the Italian chain of command in Africa.

On 15 August 1941, the German 5th Light Division was redesignated 21st Panzer Division, the higher formation of which was still the Afrika Korps. During the summer of 1941, the OKW increased the presence in Africa and created a new headquarters called Panzer Group Africa. On 15 August, the Panzer Group was activated with Rommel in command, and command of the Afrika Korps was turned over to Ludwig Crüwell.

The Panzer Group comprised the Afrika Korps, with some additional German units now in North Africa, plus two corps of Italian units. The Panzer Group was, in turn, redesignated as Panzer Army Africa on 30 January 1942.

After the German defeat in the Second Battle of El Alamein and the Allied landings in Morocco and Algeria (Operation Torch), the OKW once more upgraded the presence in Africa by adding first the XC Army Corps, under Nehring, in Tunisia on 19 November 1942, then an additional 5th Panzer Army on 8 December, under the command of Colonel-General Hans-Jürgen von Arnim.

The remnants of the Afrika Korps and surviving units of the 1st Italian Army retreated into Tunisia. Command of the Army Group was turned over to Arnim in March. On 13 May, the Afrika Korps surrendered, along with all other remaining Axis forces in North Africa.

Most Afrika Korps POWs were transported to the United States and held in Camp Shelby in Mississippi, Camp Hearne in Texas and other POW camps until the end of the war.When Rommel was promoted to the newly formed Panzerarmee Afrika, his command included a number of Italian units, including four infantry divisions.

Two Italian armoured divisions, Ariete and Trieste, initially remained under Italian control as the Italian XX Motorized Corps under the command of General Gastone Gambara. The Afrika Korps was restructured and renamed in August 1941. "Afrika Korps" was the official name of the force for less than six months but the officers and men used it for the duration.

The Afrika Korps was the major German component of Panzerarmee Afrika, which was later renamed the Deutsch-Italienische Panzerarmee and finally renamed Heeresgruppe Afrika (Army Group Africa) during the 27 months of the Desert campaign. 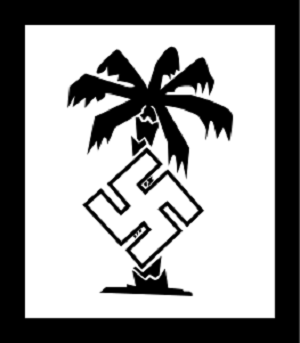 ​Seal of the Deutsches Afrika Korps
​THE KIT:

This kit comes in a shrink-wrapped end-opening type box.

I am no fan of this type of box, because invariably parts or the decal sheet will find their way past on of the end flaps to become lost forever. Give me a tray and lid type box any day of the week.

The box art shows 4 Afrika Korps troopers in the African desert taking a rest beside a Kubelwagen German Jeep.

Reading left to right, the first man is standing and holding a open food can in his left hand, a spoon in his hand and is talking to a dog in front of him. He wears a medium-brown M40 Tropical tunic and shorts. He has a light tan cloth peaked field hat on his head, high dark brown laced-up boots.

The second man to the right is seated on a dark brown jerry can that has a white cross painted on its side. This indicated that it held water and not gasoline. He wears a white pith helmet on his head, a light tan, long sleeved pull-over type shirt and medium brown shorts, he wears tan socks over low brown shoes. He is drinking out of a canteen with his left hand.

The next man to the right is kneeling on one knee and tending a metal cook stove. He has his left hand extended to get some water poured by the 4th man. He also wears a white pith helmet, medium brown short sleeved shirt, tan socks over low brown shoes.

The fourth and last man to the right is standing and pouring water out of a jerry can that is light tan with the white cross on its sides, into a metal field flask held by the third man.

He wears a light tan short sleeved shirt and medium brown shorts, tan socks over brown low shores. He has a tan billed field cap on his head with a pair of goggles strung around it.

The Kubelwagen (not included in the kit) is overall earth-yellow with no markings shown,

The dog is seated and facing the first man. He is 2 shades of brown.

One side panel says the kit contains 4 figures, paint and cement are not included, in Japanese, English, German, French, Italian and Chinese. Each language is labeled with a color illustration of the flag of the country that speaks that language.

This is followed by the copyright date of 1997 for the kit and DML’s street address in Hong Kong, China. Kit was made there

​The other side panel begins with 2 color box arts of other figure kits that DML makes: Kit no. 6058, German Panzerjagers (Eastern Front 1944) and Kit no. 6062, German Fildgendarmerie.

These are followed by the statement that the kit is not suitable for children under 3, because of sharp parts and it is designed for modelers over the age of 10.

Importer for Europe is Italeri and their address in Italy is supplied.  This is all said in multiple languages, including English.

​The bottom of the box is the assembly and painting instructions in full color.

There is a front and rear view of each of the 4 figures and the dog, water containers and the cook stove.

Below them is line drawing of the M40 TROPICAL shorts and tunic, TROPICAL PATTERN field flask, the cook stove, the 10L and 18L water containers.

All illustrations are by DML’s resident artist Ronald Volstad, who does the majority of the art work on their kits.
​WHAT’S IN THE BOX:

The largest tree is not alphabetized. It has the kit no. 6063 on a large tab on it instead. It holds the parts of the figure (divided into separate heads, torsos, arms and legs), 2 pith helmets, 2 cloth peaked field caps, 2 pairs of goggles, 2 sides of the dog and a lizard (that is not illustrated anywhere on the box) (33 parts) 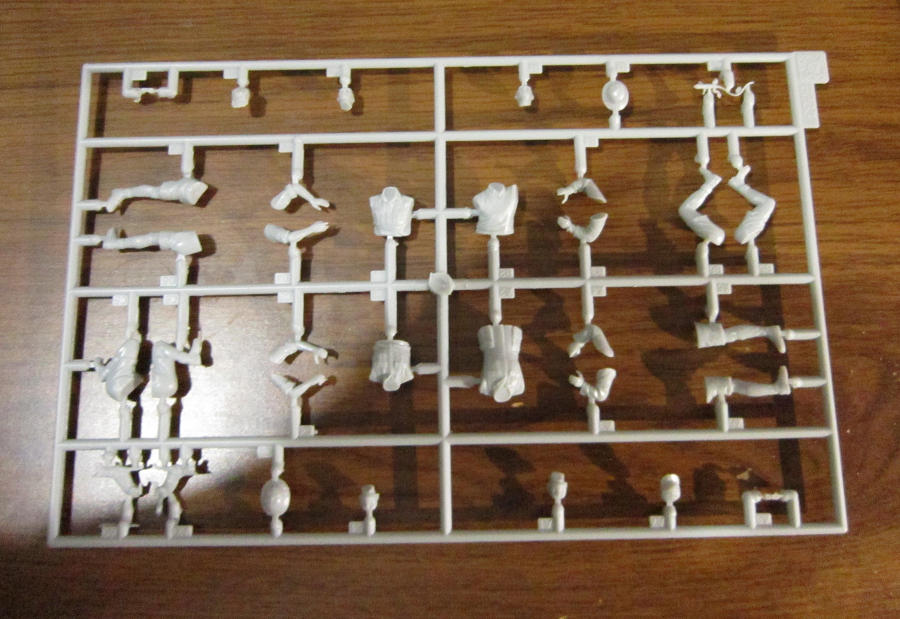 ​The other 2 medium-grey trees are alphabetized.

The letter F tree holds: water containers and their handles and caps (13 parts)

There is no jerry cans in the kit. I took some out of my spares box, assembled them and added them to this kit and put them in a clear self-locking box. 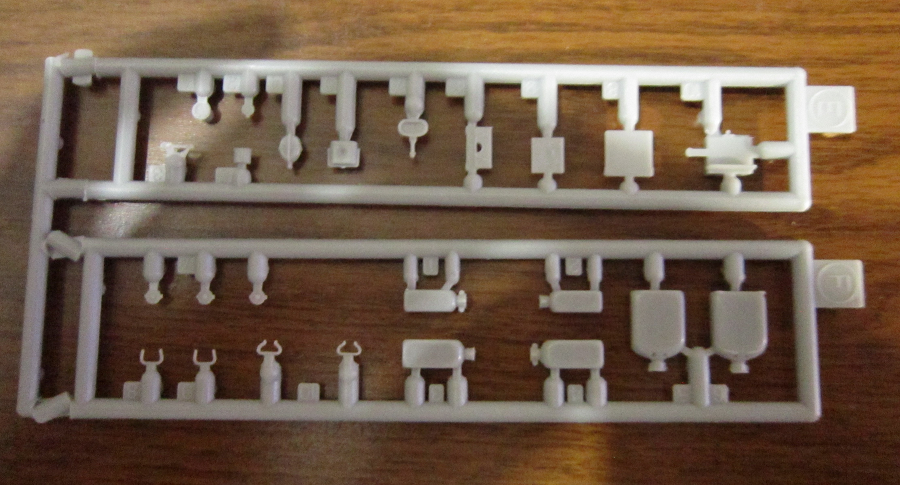 ​The decal sheet holds the white cross markings that go on jerry cans. These are in a way redundant, because DML did not provide jerry cans. You have to get them elsewhere like I did.
The Kubelwagen will have to come from another kit and once added to what’s in this kit will make for a great instant diorama scene.