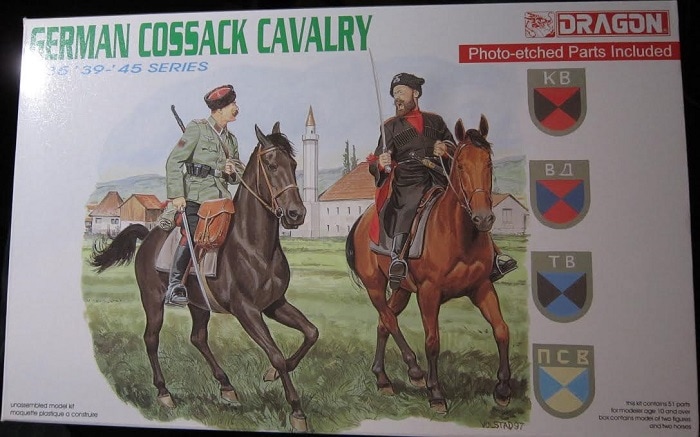 The 1st Cossack Cavalry Division (German: 1. Kosaken-Kavallerie-Division) was a Russian Cossack division of the German Army that served during World War II. It was created on the Eastern Front mostly out of Don Cossacks already serving in the Wehrmacht, those who escaped from the advancing Red Army and Soviet POWs. In 1945, the division was transferred to the Waffen SS, becoming the 1st SS Cossack Cavalry Division (1. SS-Kosaken-Kavallerie-Division). At the end of the war, the unit ceased to exist.

Upon the formation of the unit in April 1943, the Division was dispatched to Croatia, where they were placed under the command of the Second Panzer Army and were used to provide rear area security to the army.

The Division's first fighting engagement was on October 12, 1943, when the unit was dispatched against Yugoslav partisans in Fruška Gora Mountains. In the operation the Cossacks aided by 15 tanks and 1 armoured car captured the village of Beocin with the partisan HQ. Subsequently, the unit was used to protect the Zagreb-Belgrade railroad and the Sava valley. Several regiments of the division took part in several anti-partisan operations and guarded the Sarajevo railroad against the partisans. As part of a wide anti-partisan operation Napfkuchen the Cossack division was transferred to Croatia, where it fought against partisans and chetniks in 1944.

While in Croatia, the division quickly established a reputation for undisciplined and ruthless behavior, not only towards the partisans, but also towards the civilian population, prompting the Croatian authorities to complain to the Germans and finally to Hitler personally. Besides raping women, killing people, and plundering and burning towns suspected of harboring partisans and partisan supporters, the division used telegraph poles along the railroad tracks as a warning to the partisans and others. During its first two months of deployment in Croatia, special divisional court martails imposed at least twenty death sentences in each of the four regiments for related crimes.

The Cossacks' first engagement against the Red Army happened in December 1944 near Pitomača. The fighting resulted in Soviet withdrawal from the area. In January 1945, the 1st Cossack Division together with the 2nd Cossack Division was transferred to the Waffen-SS. As the 1. SS-Kosaken-Kavallerie-Division it became part of the newly formed XV SS Cossack Cavalry Corps.

At the end of the war, Cossacks of the division retreated into Austria and surrendered to British troops. They were promised safety by the British only to be lied to and removed from the compound and transferred to the USSR.
​THE KIT: l

The box art shows 2 German Cossacks riding their horses in a grassy field with houses and a church in the background.

The Cossack on the left is wearing a light tan German uniform and a black "Kubanka" (fur hat). he has a sword in his right hand and a 98K carbine slung on his back. His horse is dark grey overall.

The Cossack on the right wears a black Cossack long coat "Cherkeska" and a black "Kubanka" (fur hat). He has a red cape with a hood on it that is draped around his neck and down his back. He too has a sword in his right hand. His horse is dark brown.

To the right side of the box art there are 4 unit badges illustrated in color of Cossack units.
In the corner of the box art it says that the kit is designed for modelers over 10 years of age and that it contains 51 parts.

One side panel of the box shows 2 color box arts of other figure kits that DML manufactures: kit no. 6061, German Feldgendarmere (Field Policemen) and kit no. 6063 German Deutsche Afrika Korps troops.

​The other side panel says that the kit contains 2 figures and 2 horses and that paint and glue are not included in the kit. This is followed by the copyright of the kit of 1997 above DML's street address in Hong Kong, China and the kit was made there. 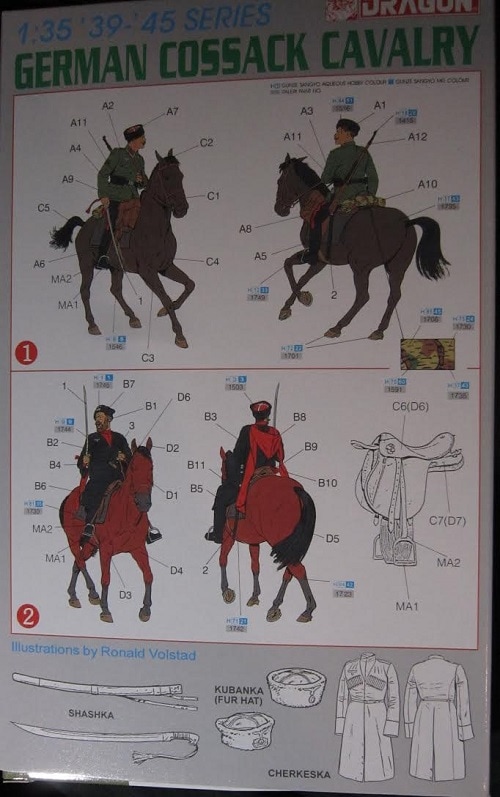 ​Also here there are black and white line drawings of: the "Shashka" sword, in and out of its scabbard, the "Kubanka" fur hat (shown twice with different badges on the front) and the "Cherkeska" long coat.

All illustrations are by DML's resident artist Ron Volstad.
​WHAT'S IN THE BOX:

The first large light-grey tree holds: the halves of the 2 horses, their seperate ears and tails, the rear sections of saddle blankets that get tucked under the back of the saddles and the 2 saddles. (14 parts) 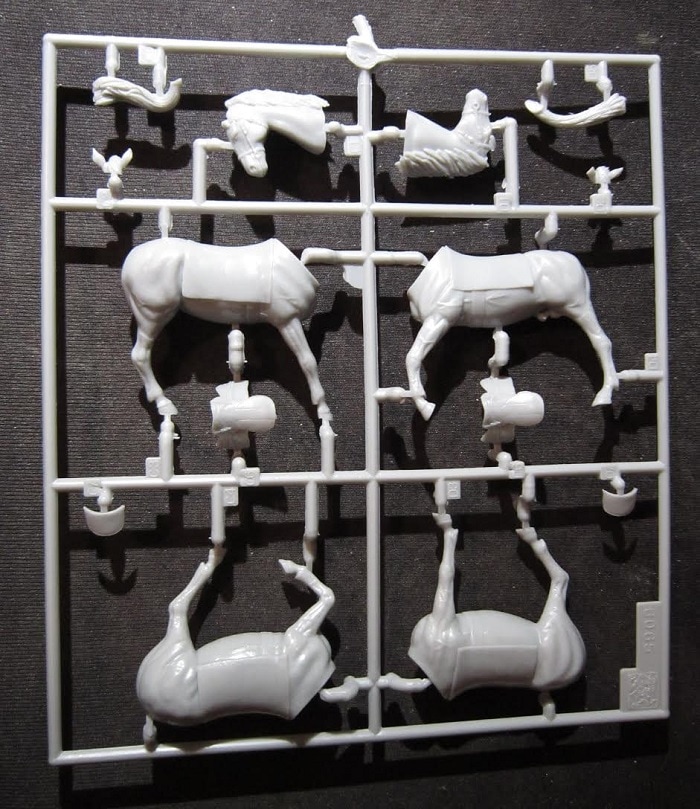 ​The second large light-grey holds: the parts of the 2 figures (divided into separate heads, torsos, arms and legs), a 98K carbine, ammo pouches for it, 2 saddle bags, a rolled tarp, 2 fur hats and three sections and the tossel of the one Cossack's cape (24 parts) 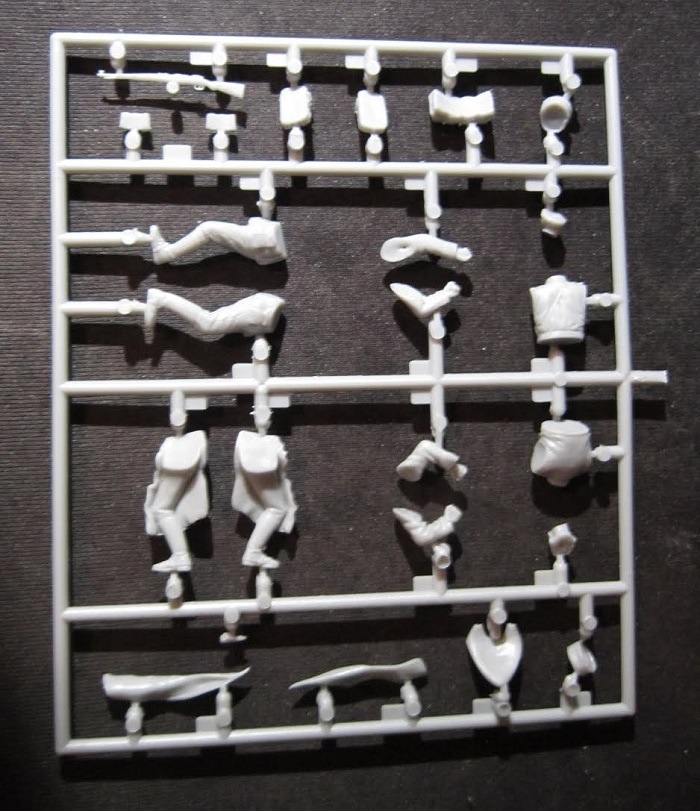 ​The small steel PE fret completes the kits contents. It holds the stirrup parts for the saddles. (8 parts) 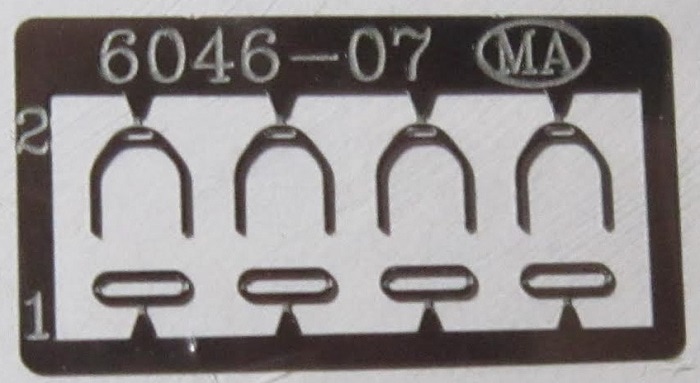 This is neat kit with different subject matter. Figures and horses are well detailed. However, the scene is a little ho-hum. It would have been better to have had the horses galloping and the figures holding out their swords for a cavalry charge.

Otherwise highly recommended.
​I purchased my kit back in the 90's at my local hobby shop.