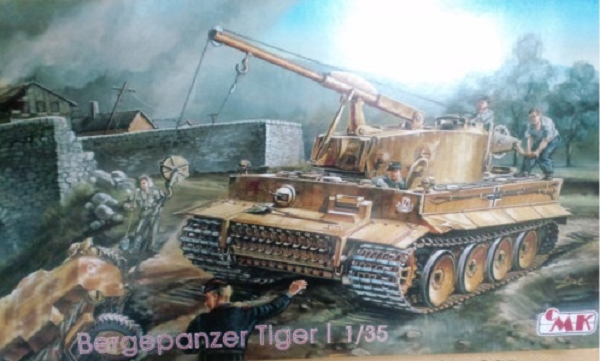 The Sd.Kfz. 181 Tiger, probably the most famous German WWII tank, could cause considerable problems in case of a technical failure. A question how to tug away immobile 56 tons of steel arose. Technical companies used common vehicles designed for civil purposes at first.

However, they were very vulnerable and had a limited off-road capability. The problem was solved by use of a pair of 18t Famo Type 3 trailers (Sd.Kfz. 9). Another issue remained unsolved - there was no vehicle able to help in case when it was necessary to take out heavy parts (ending, gear unit) of the tank for repair.

Several dozen Bergtigers were build between December 1943 and January 1944, the exact number has remained unknown - various sources give numbers between twenty and fifty-eight.

The recovery tank was built on the hull of the Tiger I Ausf. E. The cannon was removed, its bearing was covered by an armored plate with an opening for a MG 34 machine gun. Unnecessary equipment was also removed, including the ammunition, gun sight and mortar.

The modified lighter vehicle was able to tug a combat tank (lugging of one tank by another was forbidden by a special order). The principal change consisted of the installation of a crane produced by J.S. Fries & Sohn Company from Frankfort.. An arm made of a strong tube was fixed to the tower.

The outer part of the arm was movable  for the transport. The reel was installed at the rear of the tower at the former position  of storage boxes.  It was operated manually by two men. Through gear and pulley, this simple reel was able to evolve a power of 15 tons. The vehicle was covered with zimmerit.

The crane was used first of all for tank repair, sometimes also for recovery of lighter vehicles. The most vehicles were probably lost  at the Eastern Front. One belonging to the 508th regiment was captured by the Allies in Italy.

There is no Bergtiger known to survive these days. The documentation of this type is very scarce and most of it shows the captured vehicle. It is very probable that also other versions of the Tiger which came in for overhauls were also used for the modification to Bergtiger.
​THE KIT:

The kit comes in a shrink-wrapped end-opening type box with a slide-out tray inside.

The box art shows a Bergtiger 1 by a stone bridge retrieving a German half track that has slid down the river bank.

The Bergtiger is overall earth-yellow with a German crosson the hull side and a white division mark on the right hull front. It is a shield with a key on it over oak leaves. This the mark of S.S. Panzer Division "Liebstandarte Adolf Hitler".

Two crewmen are on the back of the Bergtiger standing on the engine deck and hand-cranking the hoist. They wear field gray uniforms. One is bare-headed and the other wears a soft side cap.

The driver of the tank is looking out of his hatch and wears a black billed field cap.

A crewman in an all black panzer uniform is standing in front of the tank directing the driver with his right arm.

By the bridge there is another crewman leaning on a shovel. He is in a field-gray uniform with side cap.

One side panel begins with CMK mentioned as being the manufacturer of the kit in the Czech Republis, with cooperation by Tamiya in Japan.

What I discovered about this cooperation with Tamiya is that all the trees in the kit have Tamiya's name in raised letters on them. They are from Tamiya's Tiger 1 kit.
​ Only the light gray tree that was formed in a pinning mold to make it like a spoke wagon wheel with parts on each arm may be by CMK themselves. The copyright date on the Tamiya parts is 1970.

Features of the kit are labeled with color illustrations of the flags of the Czech Republic, England and Germany over the languages of those countries.

The features are listed as: contains complete plastic model, PE parts, decal sheet, 3 languages instruction sheet, cement and paint are not included, kit is intended for modelers age 9 and over.

This is over CMK's street address in Prague, Czech Republic.
​The other side panel has a one-paragraph history of the tank in the 3 languages labeled with their flags.

The bottom of the box has 3 color illustrations of the sections of the hoist and suggested use of Humbrol or Tamiya brands of paint colors (dunkelgelb - earth-yellow) and that the kit contains PE parts. 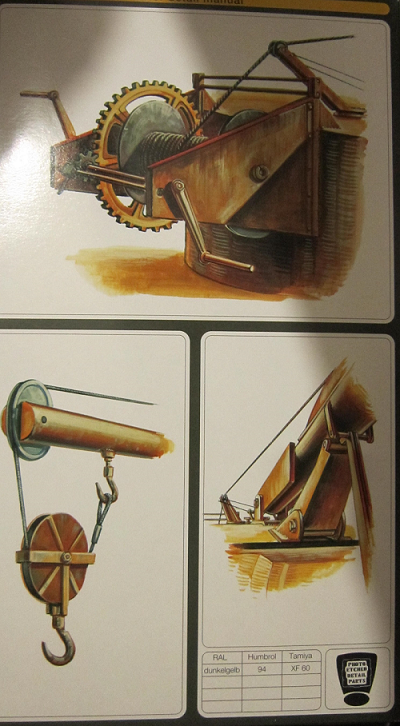 Some trees and parts are illustrated in the instructions, but not all. 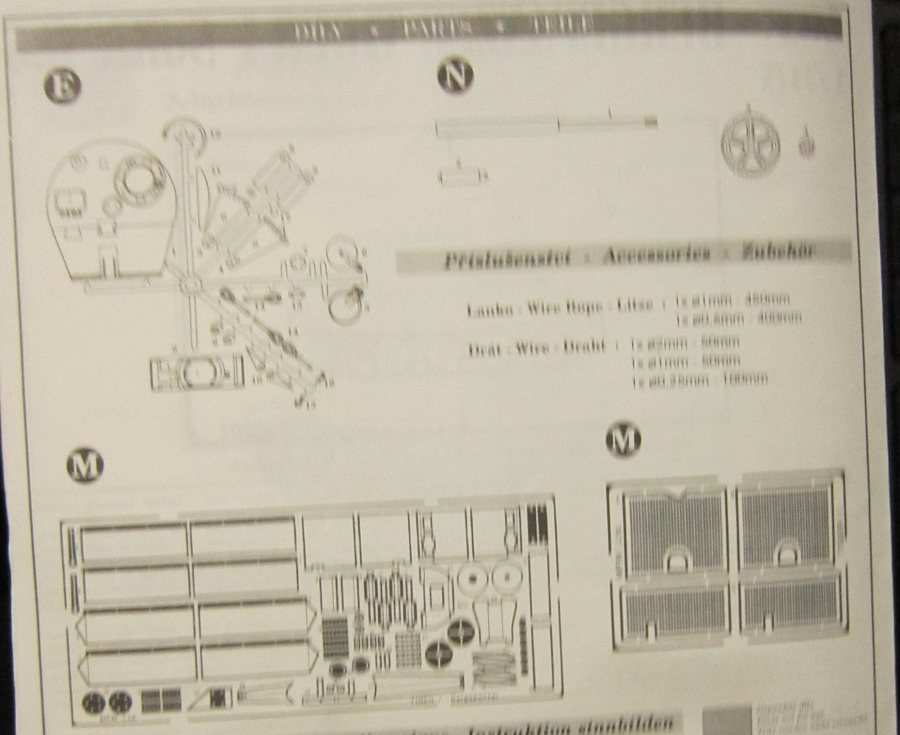 Page 1 of the instructions begins with a line drawing profile of the Bergpanzer Tiger I, over the history of the tank in Czech, English and German.

Page 2 begins with with the parts trees illustrations, over international assembly symbol explanations and list of excess parts that are not needed to complete the model and suggested listing of Humbrol and Tamiya brands of paint colors, in the 3 languages.

Page 3 begins with info about the kit: an un-assembled plastic model kit, paint and glue not included, for modelers age 10 and older, not suitable for children under 3 years because the kit contains sharp parts, carefully read instructions before assembling, each part is numbered. consider succession of assembly steps,

you will need a sharp knife, a pair of pliers, a file and a pair of tweezers, paint small parts on runner before removing, cut out each decal mark one by one and dip it in warm water for approximately 20 seconds, slide decal from the paper at the marked position and before dry push out water and air bubbles.

Below this is the first 3 assembly steps.

Page 4 through 7 give a balance of a total of 10 assembly steps.

Page 8 is the marking and painting instructions, with a 3-view of the box art scheme (already described above). It is said to be overall dark-yellow with zimmerit. However, the kit is not molded as showing any zimmerit. This will have to be done with some putty.

The trees are alphabetized, all but the tree with the 2 crewmen on it. It says Tamiya and 1969 on it. Crewmen are full bodied with separate arms and base plates (10 parts)

There are no clear parts in the kit, nor any internal details. 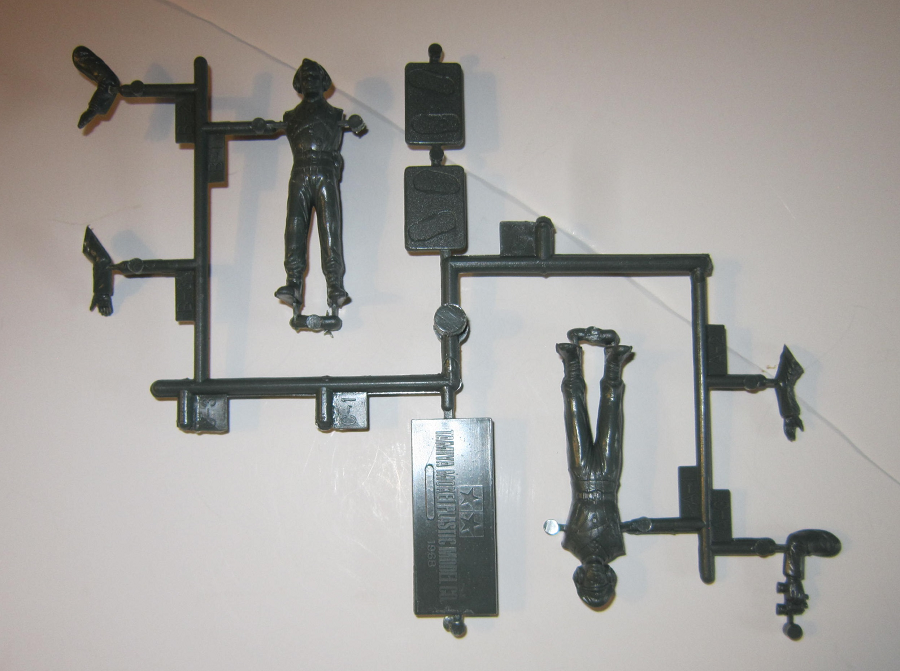 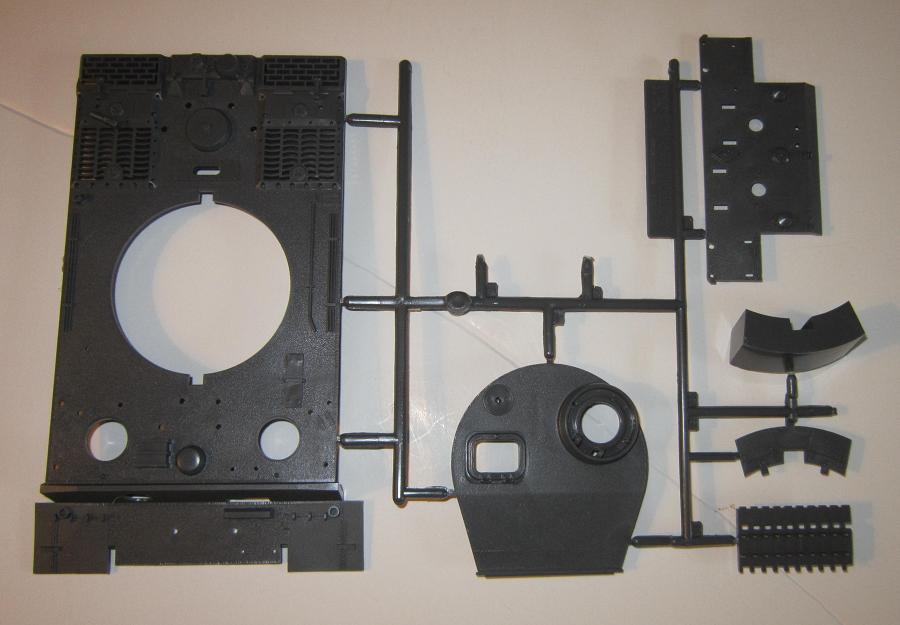 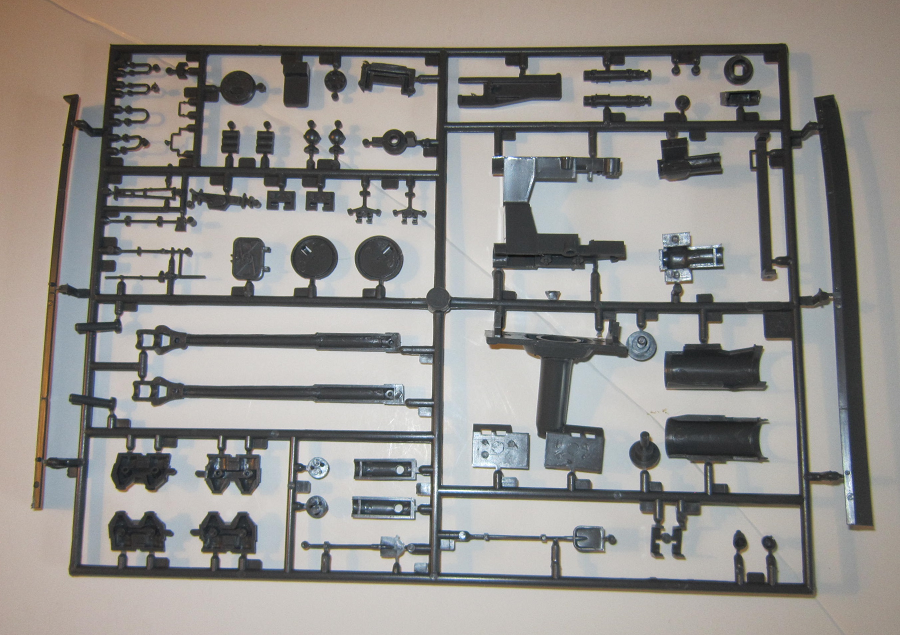 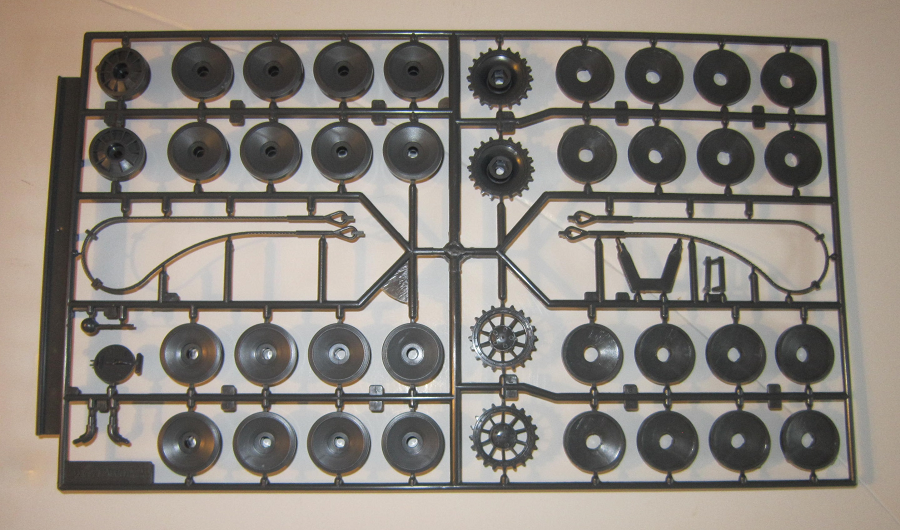 ​Dark panzer gray letter D tree is vinyl poly caps, hatch hinges and a long part I cannot identify - probably excess as it is not shown illustrated anywhere in the assembly steps. (24 parts) 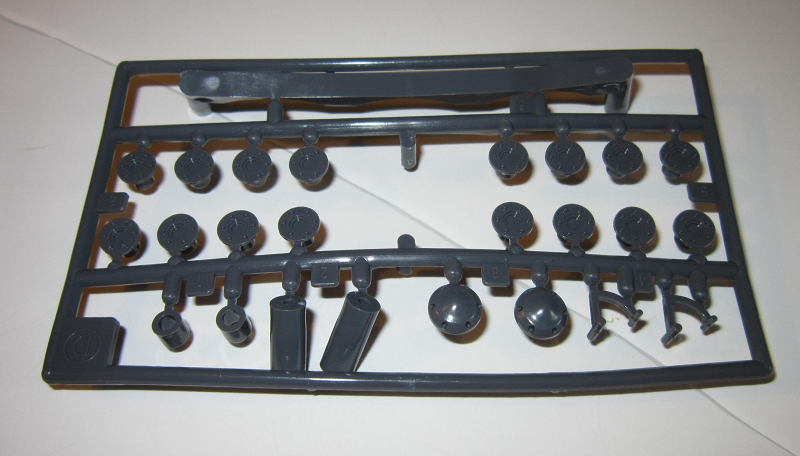 ​Next is the dark panzer gray hull bottom. It is un-alphabetized and says Tamiya and 1970 on the bottom of it. It has motorization holes in it. So, for a static model these will have to be puttied up.

​The 2 turret halves are labeled as being letter A in the assembly steps. I assume their origin is Tamiya too.

The final tree is the light gray one shaped like a wagon wheel. It is letter E tree. It holds the turret top, hatch lids, tow cable ends and hoist parts etc. (24 parts)
​I suspect this tree is the only one that was made by CMK. 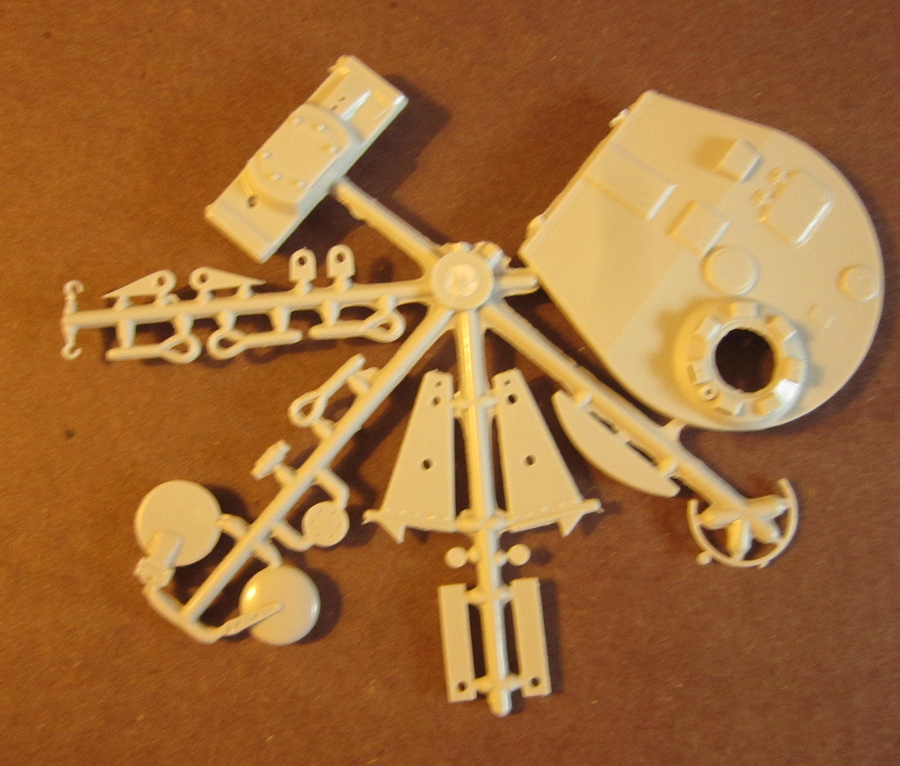 The large brass PE fret holds parts of the hoist etc. It is called out as being letter M in the assembly steps. It is in a sealed clear cello bag taped to a white card.

Metal parts are a toothed gear, a axle and a steel rod that are parts of the hoist, plus a length of braided steel wire and a length of -wire. 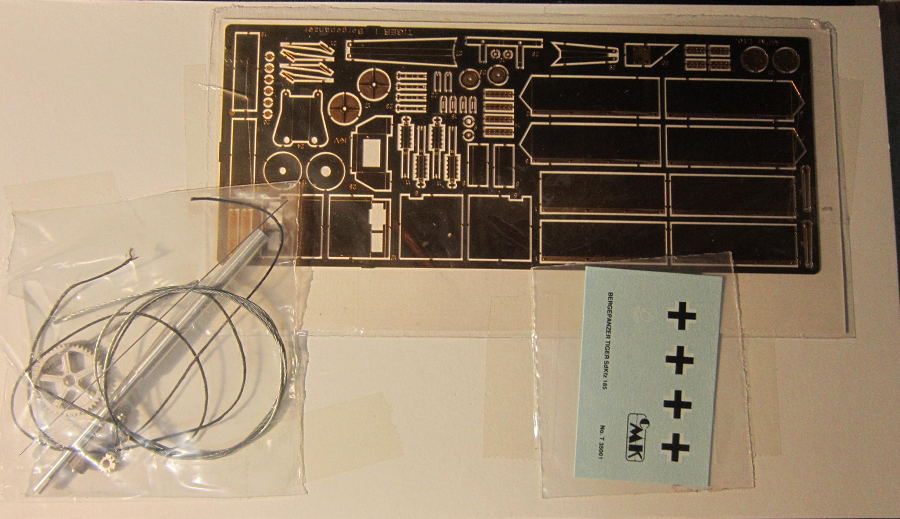 Next are the vinyl tracks. 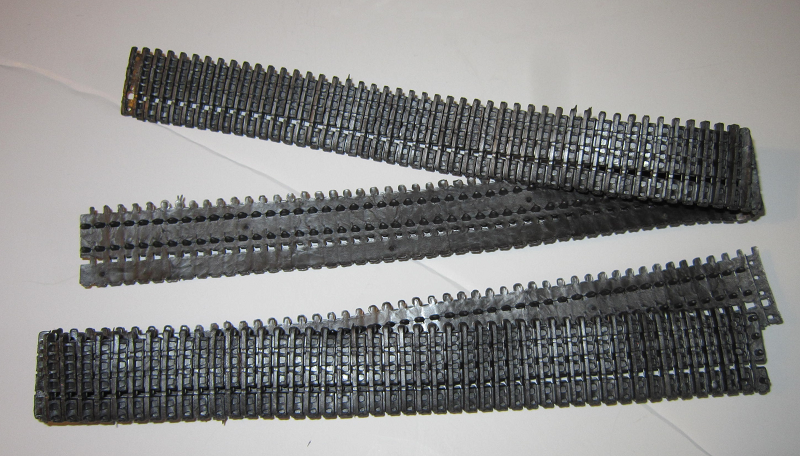 The last item is the tubing for the Feifel air cleaners.

​This kit has a lot of neat external details. However, there is no interior detail.

A lot of parts are going to wind up in a modeler's spare box that are intended for the Tiger I with a armed turret and not the Bergtiger.