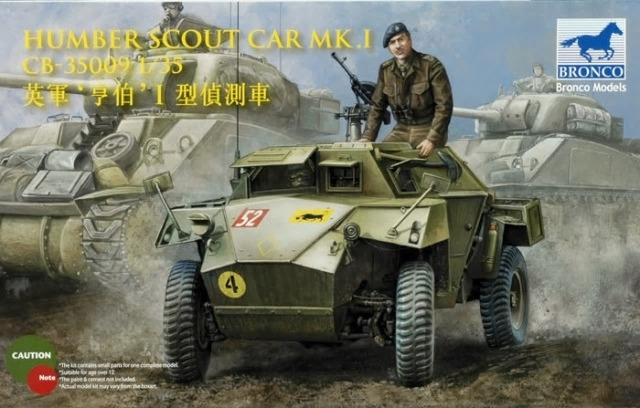 Available at Hobby Terra for $43.00 and at 5 locations overseas on the web.

The Humber Scout Car entered service in 1943, probably too late to see service in the Tunisian campaign, but was then widely used in Italy and North-West Europe. As it was a Scout Car, it was used by many different units, including the Royal Armoured Corps Armoured Guards battalions, as well as by the Royal Engineers, Royal Artillery and at the various Formation Headquarters.

In some cases it seems that unit “tweaked” the establishment to put the larger Humbers in the HQ’s with their Dingos being used at Troop level. Users included Liaison Officers, intelligent Officers, Signal Officers, Technical Adjutants, and Commanding Officers as their “run-around” when not mounted in their tank.

It was frequently used in Formation HQ’s as an un-allocated “pool” vehicle. It was also used by Britain’s allies, including the Canadians and Poles.

Bronco is an old prolific model company based in Hong Kong, China. They manufacture all manner of model subjects in the popular scales.

The box art shows a color illustration of a Humber Scout Car raising a trail of dust and being followed by 2 Sherman tanks.

The Humber and the Shermans are all overall olive-drab.

The Humber has a red square with a white 52 on it on the left side of its hood and yellow rectangle with a black rampant bull on it on the right side of the hood. On the left side of its nose is a yellow circle with a stenciled blac 4 on it. All its vision flaps are open and the driver is looking through his and wearing goggles. The commander is standing in the roof hatch. He wears a brown jacket, tan trousers and a black beret.

The commanders of both Shermans are looking out of their turret hatches. They both wear the same color uniforms as the Humber commander. They both have headphones and goggles on and one is speaking into a microphone.

​The other side panel has a 5-view of the Humber that show it in overall SCC2 brown, with white serial no. F195274 on its side doors and a square that is divided into white at the top over red and green sections with black “D & M A.F.V.S. on the white section on the left side of the nose and rear and a red and white checkerboard square on the right of the nose and the rear. The white serial no. is repeated on top of its hood.

This Humber was with the AFV Driving & Maintenance School, Lulworth, UK, 1943.

This kit contains 11 olive-drab trees and a loose hull tub part, black vinyl tires, the decal sheet and a PE fret. However, the fret has been lost or never was put in the kit at the factory to begin with.

Nothing is cello bagged.

Page 1 begins with a very dark and grainy repeat of the box art at the top, over the history of the Humber in English and Chinese.

Page 2 begins with decal application instructions, in English and Chines over a painting and marking guide that shows six 4-views of the Humber.
1.   A Humber that is overall olive-drab. It has a white serial no. F198202 on its sides, a square that is white at the top and blue at the bottom, with black no. 40 stenciled on it on the front of the left front fender and a blue shield outlined in black with eye on it on the front of the right front fender  On the left side of its nose is a yellow circle with a black no. 5 on it. There are several lines of white words on its hood that are too small to make out what they say, even with my magnifying glass. There is a tiny stenciled black 40 on it.

This Humber was with Guard Armoured Div. Company, Germany 1945.

3.   A Humber that is overall dark green. It has a white serial no. 83-287 on its sides, a square that is divided in two diagonally in white and blue with un-identifiable symbols on each color on the front of its left front and rear fenders, and a red rectangle with the serial no. on it in white with a yellow symbol on its nose. On the left side of the rear of the fighting compartment there is a white circle with a red cross on it and on the right side there is a red shield with a white cross on it. This Humber was with HSC of Hussar Regiment, Danish Army 1950.

4.   A Humber that is overall olive-drab. It has the yellow slogan “CEREBRAL” on its sides and a white star and white serial no. F255374. On the left side of its hood is a red square with a white 52 on it. On the right side of the hood a yellow oval with a black rampant bull over a yellow outline of a diamond. On the nose there is a yellow circle with black no. 4 on it on the left. This Humber was with RHQ 3RTR, 29th Armoured Brigade, 11th Armoured Div. Germany 1945.

5.   A Humber that is in a wave pattern of SCC5 light-mud and SCC 14 blue with a black camouflage pattern and white under-shading. It has white serial no. of F over 198266 on its sides a square that Is divided into red at the top and blue at the bottom with a white 46 on it on the left side of the hood and a black circle with a yellow axe on it on the right side of the hood over the white serial no. repeated. On the right side of its nose is another square that is blue with its lower left corner in red and a white Y2 on it, on the left side of the nose there is a yellow circle with a black 4 on it. On the left side of the front of the fighting compartment there is a white circle with a red cross on it. This Humber was with the 64th Anti-tank Regiment RA, 78th Infantry Division, Italy 1944.

6.   A Humber that is overall BS224 deep bronze green. It has a yellow circle outlined in black on its sides, On the front of its left front fender and right rear one there is a square divided diagonally in half into red and yellow. On the left rear and right front fender there is a blue square with a white palm tree and lion on it. On the left side of the hood there is a yellow circle with a no. 5 on it. On its nose and rear is the white serial no. 58 ZS 93. On the left side of the front of the fighting compartment there I a small white circle with a red cross on it. This Humber was with C Squadron, 4th Hussars, Malaya 1850.

Page 2 of the instructions begins with the parts trees illustrations, over international assembly symbols and a suggested paint color listing of Gunze Sangyo, Hobby Color, Humbrol and Tamiya brands of hobby paints, in English and Chinese.

Page 12 also is the color guide.

This is an odd way of doing things, that I have never seen done in a kit before.

The trees are alphabetized. 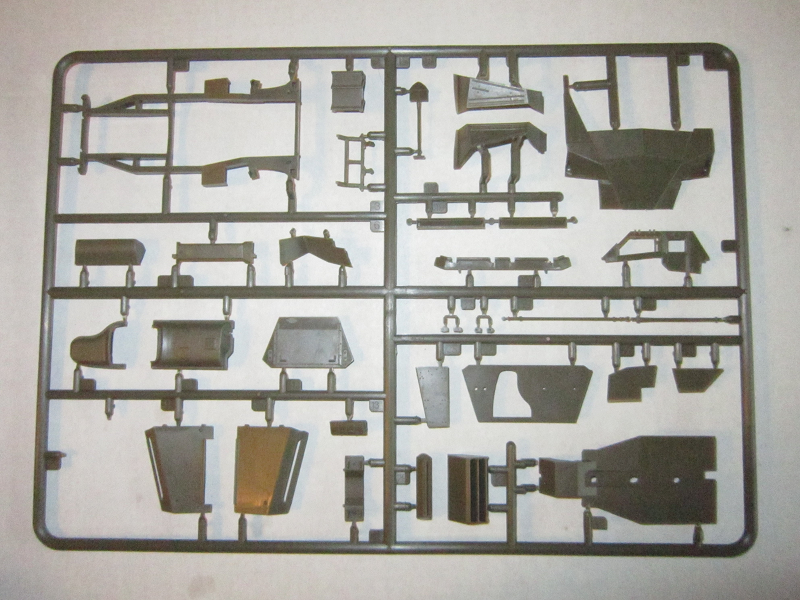 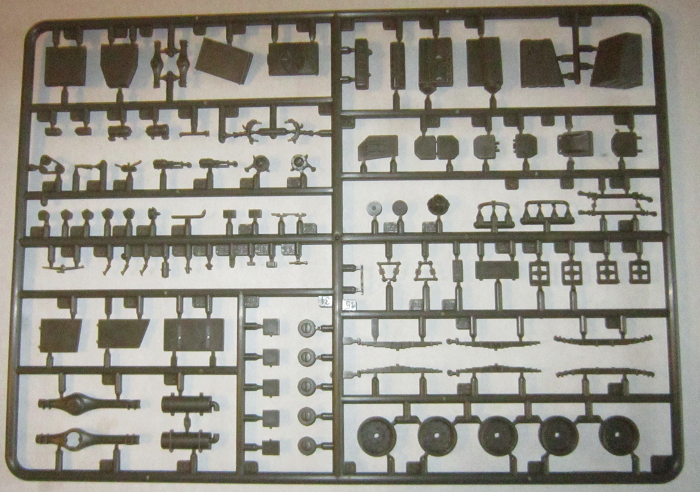 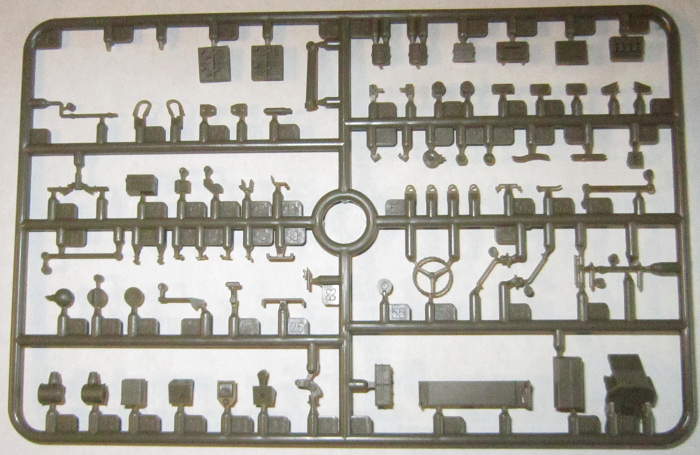 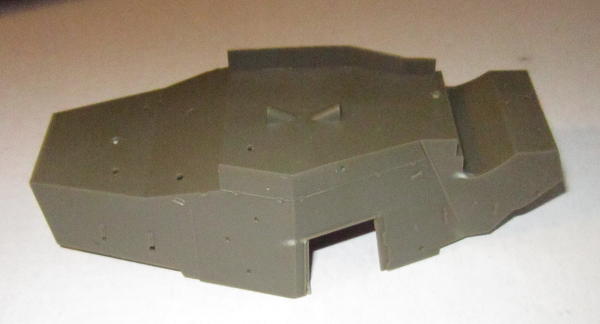 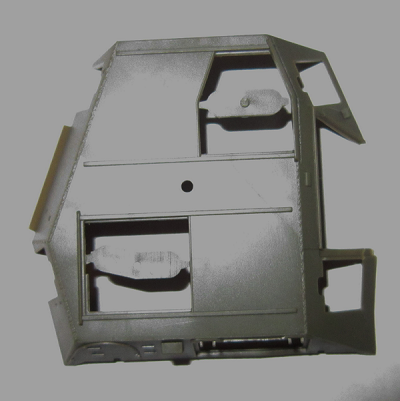 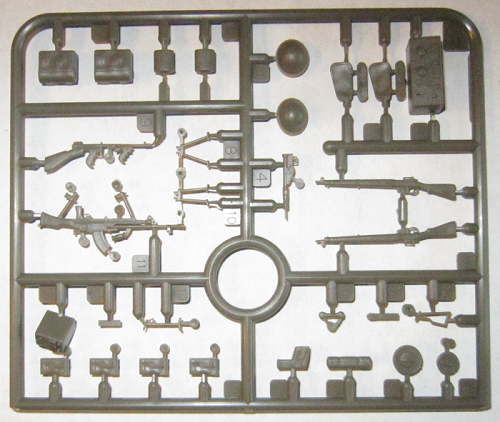 ​Next is the 5 black vinyl tires. 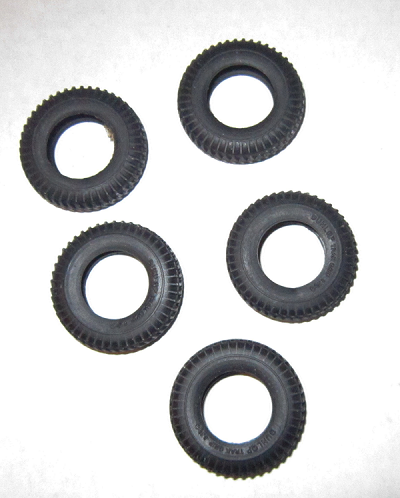 ​Letter P was the PE fret that is lost.
​I have bought 2 Eduard Brand PE frets for the Humber to take care of the fact that the kit’s PE fret is missing. They are sets number 36012 that cost me $14.95 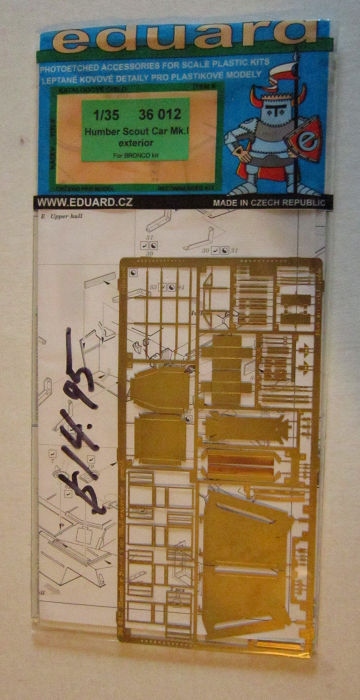 ​I also found a British seated figure in my spares box. He is full bodied and light tan plastic. I wish that the kit had included crew figures. 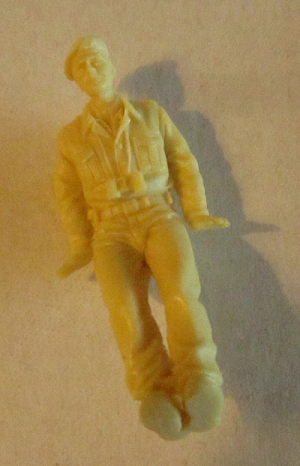 The decal sheet for the versions listed above. 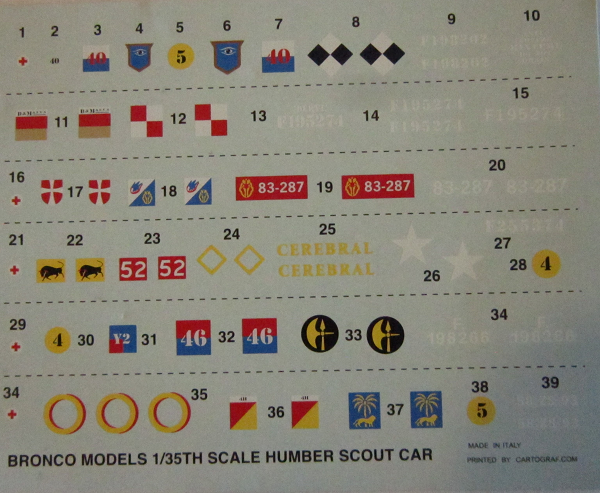 There are no clear parts included.

Detail is excellent inside and out.