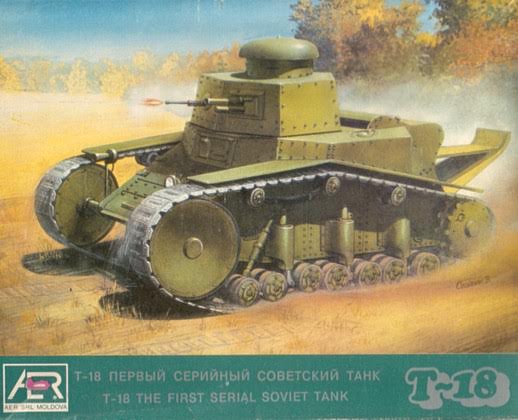 At the end of 1928, the T-18 was put into production at the Leningrad "Bolshevik" works. The first 30 tanks were made using Osoaviakhim Organization's resources and in the spring of 1929 they were transferred to the Red Army in the field under the designation MC-1 (which meant small tracking).

The MC-1 tanks were successfully used in the course of a conflict, evoked by Chinese militarists, on the East-Chinese rail-road.  On November 20th, 1929, Red Army units, being supported by only one MC-1 tank company (9 tanks) smashed the White Chinese Guards. The Chinese exceeded the Red Army units by twice their number. The enemy soldiers, who had never seen a tank before, fled in panic.

In the summer of 1938, during the armed frontier conflict, at the Khasan Lake, the veteran tank, by that time already removed from regular Soviet armament, was used as an immobile weapon placement against the Japanese.

The T-18 design was adopted as traditional. Joining a 35 hp air-cooled engine with a power generating unit, allowing it to be place transversely in the rear casing, thus making it shorter and lighter.

Taking the World War I experience into consideration, the designers found a simple and original way to increase the tank's possibility in overcoming wide ditches. It was a removable  "tail" attached to the stern armor plate.

Due to it's compact arrangement, the T-18 was almost a ton lighter than it's forefather: the French Renault F-17. As for armament, armoring, speed and fuel distance endurance, it could compete with it's contemporaries.

Later, the MC-2 and MC-3 modernized designs, equipped with more powerful engines of 40 hp and the armored casing was thickened up to 16 mm. A stern recess, placed in the turret, housed an additional machine-gun of Fyodorov manufacture which was later replaced by Degtaryov's for tanks.

The T-18 (MC-1) tank was kept in mass production from 1928 to 1931 and became the first Soviet mass produced tank (900 being produced). This allowed the formation of large-scale tank units.
In May of 1930, a mechanized crew was formed, being equipped with MC-1 tanks, armored vehicles and other motorized prime-movers. It was the first such unit in the world.

AER is a model company based in Moldovia.

The kit comes in a shrink-wrapped end-opening type of box of rather flimsy cardboard (mine was badly crushed). The box art shows a T-38 tooling along and firing its gun, while raising a cloud of dust.

The back of the box has a 3-view color drawing of a T-18 in a generic overall dark green paint scheme. Next to this drawing is a tech data listing.

The kit contains 4 large medium gray parts trees,  the decal sheet and instructions. The parts and decals are in a very blousey and unsealed cello-bag.

The instructions consist of a small single sheet, folded into 4 pages.

The first page begins with a black and white photo of an actual T-18 with a crowd of spectators milling around it. This is followed by the history of the vehicle in Russian and English.

Pages 2 and 3 have the parts tree drawings (printed very very small) and a bunch of very complicated and confusing exploded assembly drawings. These appear to be in 4 steps.

These line drawings are followed by a 3-view drawing for painting the tank, but no markings are shown. A tech data list follows and some line drawings of various hobby tools. 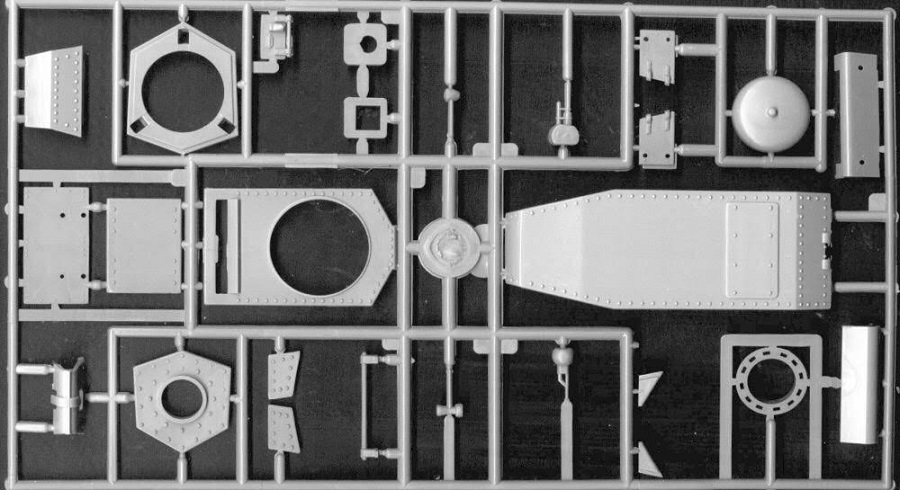 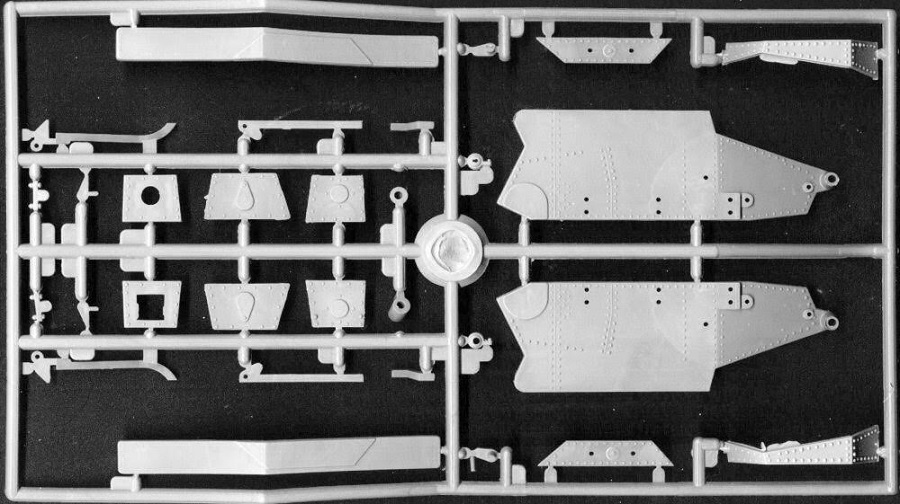 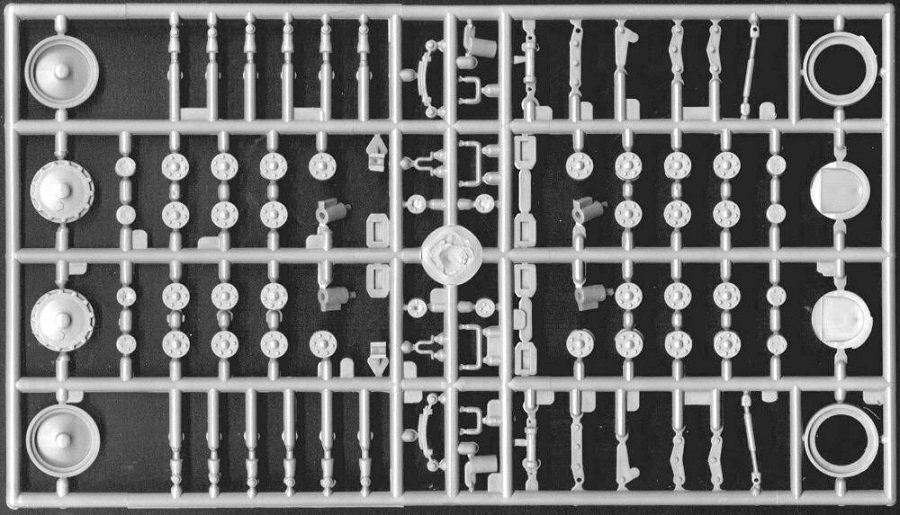 ​The final large tree holds the individual track links (120 parts).
​None of these parts trees have part numbers molded on them. Strangely, some tabs are molded a few places on some of the trees, where you normally would see a part number molded on them. But, they are blank.

Maybe AER changed their mind about adding the numbers?

This means that you will have to keep referring to the parts tree drawings as you assemble the kit. With these drawings as tiny as they are this will be a real circus. Bad move AER.

Parts are very nicely detailed, especially the rivet pattern. I found no flash anywhere, and any mold ejector pin marks are on inside surfaces of things where they will no be seen after assembly.

The decal sheet is mostly red stars with some white Russian words. Sadly, no placement info is provided anywhere in the kit for these. Another bad move AER. 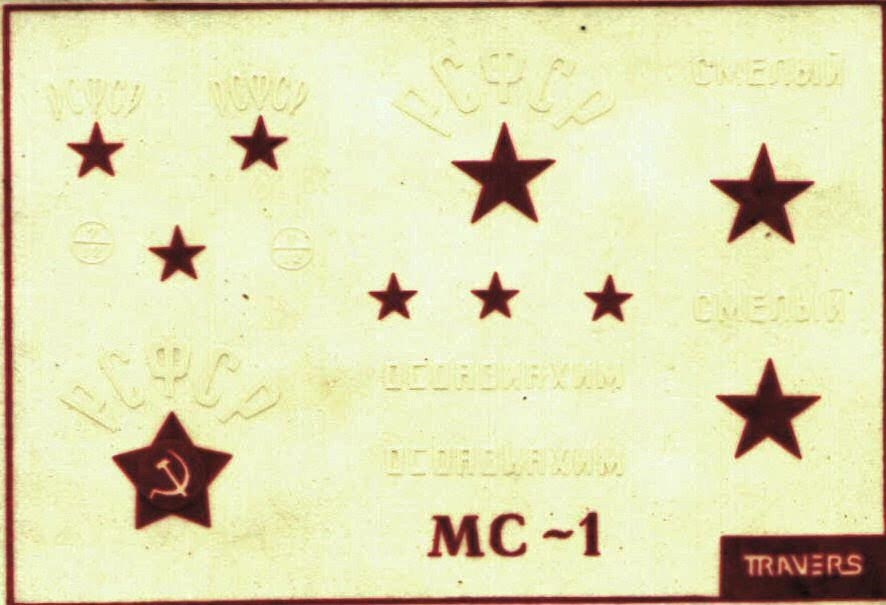 I have another resin and white metal kit of the T-18 by CK brand out of Russia. I had it halfway built and a grand-son committed mayhem on it. It is damaged beyond repair and parts got broken and lost.

However, some parts on it are better done than the AER kit and I will cannibalize them for it. Especially, the tail-skid and the fuel filler caps. That kit, being made of solid resin and white metal parts would have been a rather heavy kit when assebled and I don't know if the suspension could have supported it.

Except for the poor assembly instructions and lack of part numbers on the trees and also the lack of decal placement info, I recommend this kit to Russian armor modelers.

Having a kit of the first series produced light tank, that the Russians built seems like a must have.
​I got my kit in trade with a modeler in Warsaw years ago.