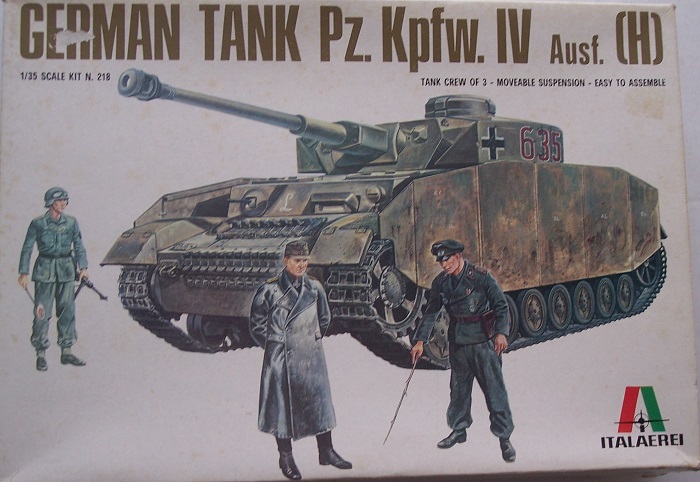 Italaerei (now spelled Italeri) is a prolific manufacturer of model kits based in Italy. They make all manner of model subjects in the popular scales: aircraft, armor, military figures, ships, cars, trucks and some diorama accessories. Over the years their molds have also appeared under the Testor and Revell labels.

In January 1943, the production of the tank type IV was about to be discontinued to leave room for the Tiger and Panther tanks, but thanks to the determined intervention of General Guderian, who strongly opposed it, the project was soon set aside. On the other hand, at that time no more than 25 units of the Tiger tank were produced each month and the Panther type had not yet entered the fight.

The father of the German Armored Arm made some improvements on the main hull in order to enable the Panzer IV to face successfully the more recent vehicles with which the enemy were equipped. Therefore, it was decided to replace the gun which had been mounted until then with a more powerful one and the type chosen was the 48L. Also, around the hull and the turret some additional shields (schurzen) were mounted with a simple framework  spacer. This additional protection, 5 mm thick on the hull sides and 8 mm around the turret, was considered quite sufficient to with-stand the anti-tank projectiles of the enemy, who used empty charges. As a matter of fact, the additional shield absorbed the initial murderous flash of the charge and enabled the vital parts of the tank to with-stand  the second explosion which took place in the space between the shield and the hull itself.

Another proposal formulated in October 1943 seemed for a certain time to determine the definitive decline of the type IV. Some responsible people of the Todt Organization, busy with the enormous problems of fortification presented by the equipping of the Western Rampart had been the possibility of using the tank turrets which once earthed up would form an excellent block house in miniature. Fortunately, also this project was stopped and German was not deprived of one of its most powerful vehicles of WWII.

In March 1944, the last version of the type IV was produced, namely the “J’ version. The visible improvements were the vertical exhaust pipes and the additional armor plating on the sides which was now made of a heavy wire netting. Another important thing was also the adoption of tracks with larger links which enabled it to perform satisfactorily on particularly rough ground.

Before ending it is necessary to remember that the H version, immediately after its appearance on the front was provided with a heavy paste covering called ZIMMERIT, which was applied by the crew in the battle areas. The aim of this additional protection was to minimize the efficiency of the magnetic charges, which were used especially by anti-tank units and were in fact limpet mines. The application of these mines was very simple as the covering was magnetized so that the great metallic mass of the tanks could be used as magnets.

The production of the type IV went on till the end of the war in its last versions, H and J with more than 6,000 units being produced in the Nibelungen Werk in Austria and Krupp-Gruson AG in Magdeburg Germany.

The kit comes in a tray and lid type box. This kit came out initially in the 60’s and it’s latest re-release in now kit no. 6486. The new kit has new box art, a fret of brass PE, new decal sheet and one new parts tree that has individual links on it etc. The rest of the other 3 parts trees are identical to this one from the 60’s. The new box art does not show the 3 crew figures, but they are still in there.

The box art shows a Pz.Kpfw. IV Ausf. H posed against an all white background. It is in overall panzer gray with the turret number 635 in red with a white outline. On the front of the hull is the white letter “L” insignia for the Panzer Lehr Division. This marking is included on the decal sheet in the kit. Three figures are standing around the tank. One of them is a feldgerndarme with a MP40 machine pistol and a traffic baton. He wears a field gray uniform with the feldgerndarme gorget on a chain around his neck. He has a steel helmet with goggles on it. His pants are bloused into anklets over low shoes.

The second figure is of an officer wearing a long black overcoat over jack boots. He has a side cap on his head and has his hands cupped behind him.

The third figure is dressed in the black Panzer uniform with his pants bloused over low shows and he wears a peaked cap. He is holding a stick in his left hand.

The box art says this crew of 3 are in the kit, along with a movable suspension and the kit is easy to assemble.

One side panel has the color box arts of 4 other AFV kits that Italeri marketed in the 60’s:

No kit numbers are shown for these.
The other side panel repeats the box art of this kit as a small illustration. This is followed by the history of the tank in Italian and English.

The kit contains 4 trees of dark panzer gray parts and the loose turret top piece. These trees are not cello bagged. A tree of dark brown vinyl rubber-band type tracks, the decal sheet and the instructions complete the kit’s contents.

The instructions consist of a large sheet that is folded several times to fit the box.

It begins with a black and white photo of the model made up in a base of earth yellow with red-brown and green splotches over it. It carries the turret number 625 in red with white outline and is a

Below this is the history of the tank in Italian and English again.

Next is the parts tree illustrations with general instructions in 4 languages, including English.

After this is the nine assembly illustration drawings, spread across the length of this big sheet.

The reverse side of the sheet has three 3-views of different paint scheme patterns all in a base of earth yellow with different patterns of red-brown and green swatches over it.

Below these is 2 black and white photos of the kit made up as an unknown unit with the turret number 3 on the turret as a white outlined numeral.

Next are the crew figures painting instructions.

The last section of the instructions has 6 different division marks explained:

The parts trees are NOT alphabetized and don’t have the part numbers molded next to the parts on the trees. The parts trees illustrations will have to carefully and constantly refered to be able to get the right parts. Bad move back then Italeri.

The first of the dark panzer gray trees holds: the side skirt armor plates and their hangers etc. (52 parts) 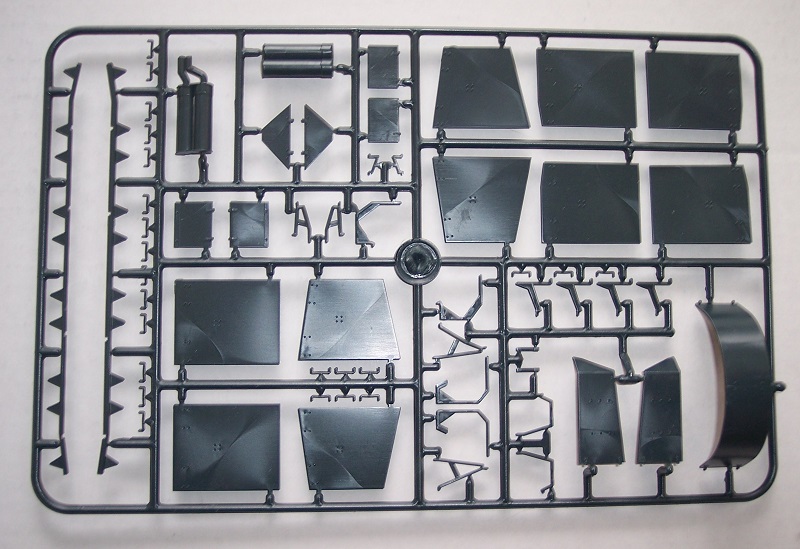 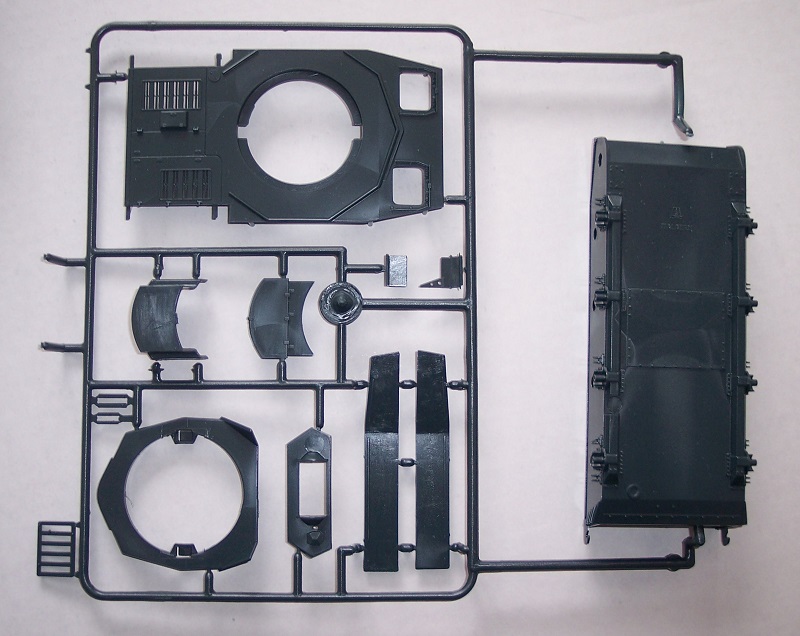 The turret top part is loose. 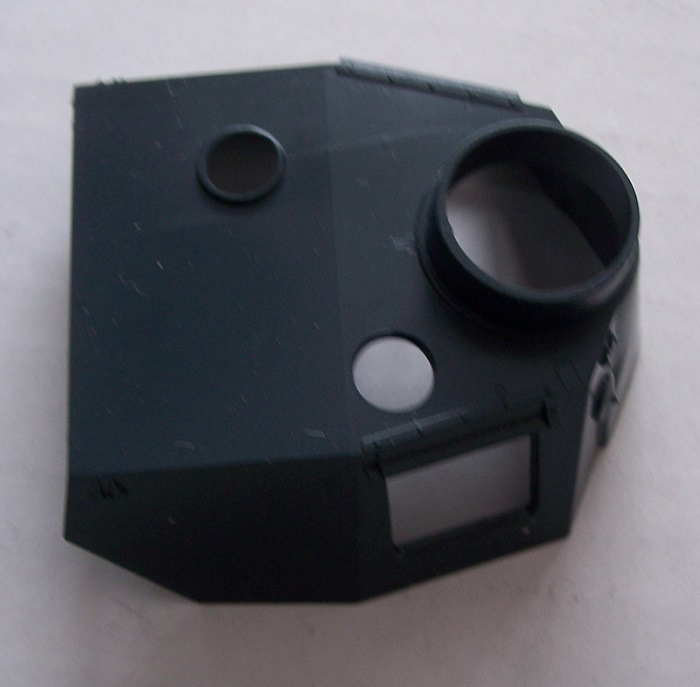 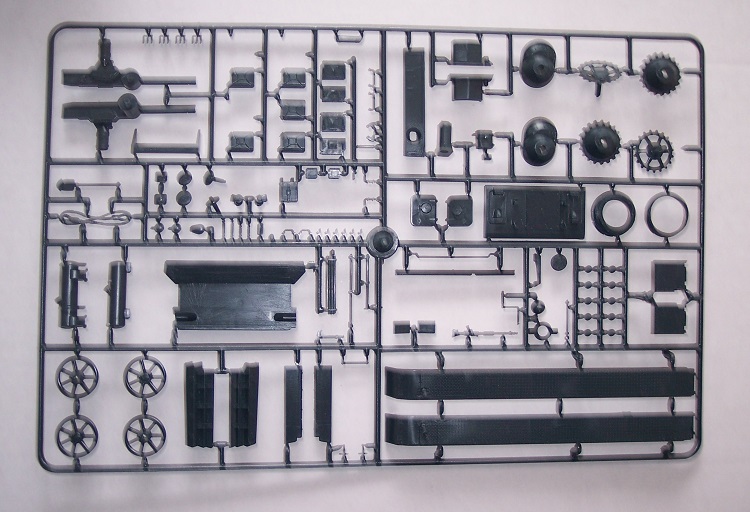 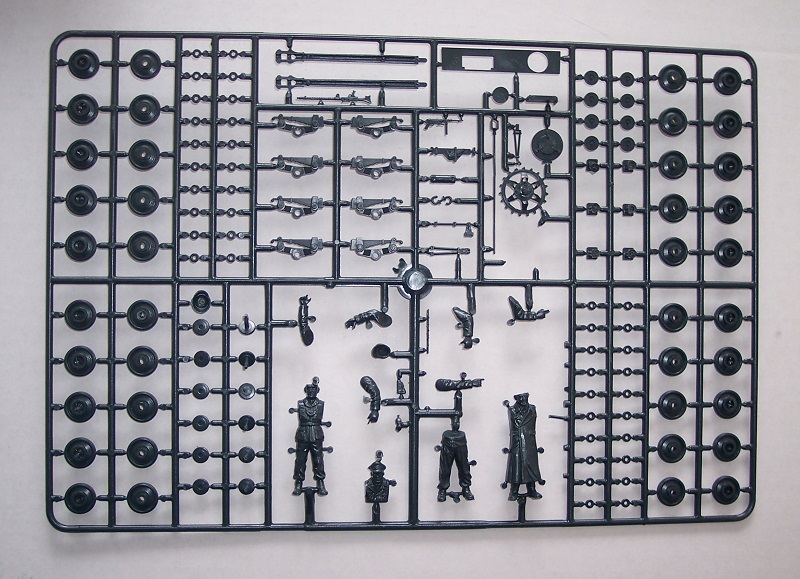 The dark brown vinyl parts tree holds two runs of rubber band type tracks and 4 extra short runs of spares. I am sure, given the age of this kit, that these tracks are NOT of the newer glueable vinyl formula.

The decals complete the kit’s contents. 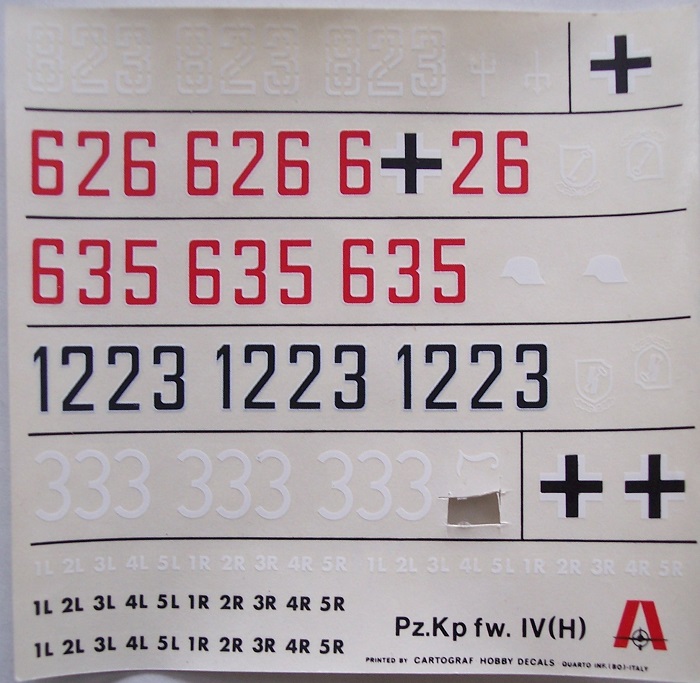 This kit, as mentioned above, came out in the 60’s and is state of the art for back then. However, the detail is quite nice and it will make up into nice model. It has been re-released several times over the years and is readily available various places. I recommend it to modelers of average building skills.
I won my kit in a raffle at a IPMS contest recently.